You are here: Home / Ankle Sprain 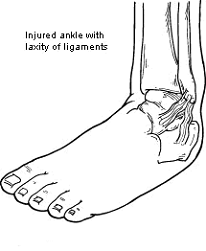 .  The ligaments are strong pieces of collagen tissue that attach from one bone to another separate bone across a joint.  They are a form of passive stability and together with active stability provided by the muscle-tendon unit, keep the joint position and load bearing cartilage in good congruency.

How did I get it?

An ankle ligament sprain will be painful over the area over the ligament.  This is usually associated with early swelling and bruising.  There may be an associated odd feeling with the sprain as sensory receptors within the ankle ligament have been compromised.  Instability is common especially on uneven surfaces.

How is it diagnosed?

A description of the symptoms and the event which lead to the injury is a good indicator of potential sprain sites.  An inverted foot posture leads to lateral ligament sprain.  This is the most commonly injured ligament in the ankle.  An everted foot position indicates a medial ligament sprain. Medial ligament sprains are less common but often more serious.  Hyper extension of the ankle or a dorsiflexed, externally rotated ankle often results in a high ankle sprain.   Specific testing and palpation of each of the ligaments also is very reliable.  Ultrasound and MRI are good for diagnosing the degree of injury and detecting concomitant bone, tendon and chondral injury.

Will I need surgery?

Surgery may be required for higher grade ligament sprains when conservative measures have failed to address instability issues.  Damage to the higher ankle ligaments which provide the stability of the mortise will require fixation if the mortise displays widening on weight bearing x-rays.

How do I stop it coming back?

Ligament damage disrupts the ability of the sensory receptors in the ligament to detect ankle position and can therefore contribute to further ankle ligament sprain.  Muscles stabilisers may also be inhibited early after ankle sprain.  Proprioceptive retraining helps to re-educate these sensors and detect perturbations of the ankle.  Peroneal strengthening exercises are important if there is any instability due to ligament laxity.  This provides some preventative measures.  Any remaining instability will benefit from taping and ankle support braces.

Shore Physiotherapy is a small clinic located in North Manly.   We cover all areas of upper and lower body musculoskeletal pathology from trauma and … END_OF_DOCUMENT_TOKEN_TO_BE_REPLACED

Please be aware that the current contact number for the clinic is 02 8937 3852.  It has been in service for the past few years.  The old number of 9460 6788 which is registered at a different exchange is no longer in service. Apologies … END_OF_DOCUMENT_TOKEN_TO_BE_REPLACED